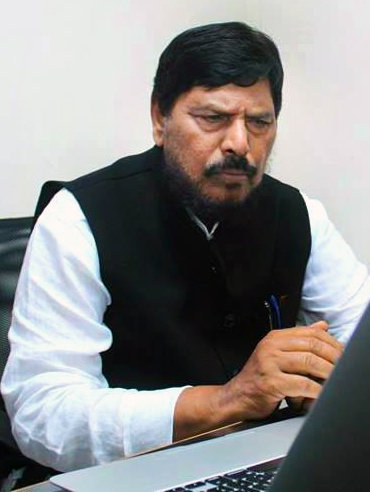 Ramdas Athawale (Born 25 December 1959) is an Indian politician from Maharashtra. He is the leader of the Republican Party of India (A). Currently, he is Minister of State for Social Justice and Empowerment in the Narendra Modi government, and represents Maharashtra in the Rajya Sabha, the upper house of India's Parliament. Previously he was the Lok Sabha MP from Pandharpur & Dadar Constency. Athawale was National President of Dalit Panther of India organisation. He was member of Maharashtra Legislative Council from 1990 to 1995 and position of Cabinet Minister for Employment Guarantee Scheme and Prohibition Propaganda, Social Welfare and Transport in the Government of Maharashtra. He represented the Pandharpur constituency of Maharashtra and is the president of the Republican Party of India (A) political party. He also represented Mumbai North Central in 12th Lok Sabha during 1998-99. He left the Nationalist Congress Party-Indian National Congress alliance in 2011 Lok Sabha election. Athawale led the RPI party, joined the Shivesena-Bharatiya Janata Party alliance in 2011 and contested Brihanmumbai Municipal Corporation elections together. In 2014, Athawale was elected to the Rajya Sabha, which is the|upper house of parliament. He represents Maharashtra. Athawale was born to Bandu Athawale and Honsabai Athawale in Agalgaon,Sangli district in Maharashtra. He is married to Seema Athawale and has son named Jeet. He is Educated at Siddharth College,Mumbai.